EuPRAXIA highlight image reproduced from the ESFRI application document. On the top we see the planned, plasma-based EuPRAXIA electron and FEL facility at Frascati, Rome, Italy. The flags indicate the countries of EuPRAXIA’s member and observer institutes.  In the lower right the simulation of a plasma accelerating structure is visualized, showing a plasma wakefield driven by a (large) driver pulse that is trailed by the (small) electron beam to be accelerated. The technical model of the beam line is included on the lower left, with a straight electron beam line coming from the back of the image and transverse lines for the interacting laser pulses.

11 new research infrastructures of high strategic importance to be included in important strategic roadmap were announced on 30 June 2021Type your paragraph here.

Dr Ralph Assmann, project coordinator, Leading Scientist at DESY (Deutsches Elektronen-Synchrotron) in Germany and at INFN (Istituto Nazionale di Fisica Nucleare ) in Italy, said: “The inclusion of EuPRAXIA in the ESFRI Roadmap is a fantastic result and testament to the excellent work of the collaboration over the past years. EuPRAXIA is a world-wide first, new kind of compact facility and will be constructed at two European sites. The broad level of European and world-wide collaboration in EuPRAXIA, also involving European laser industry, brings in all the required excellence for success.”

Dr Massimo Ferrario Leading Scientist at INFN, chair of the EuPRAXIA Collaboration Board, added: “EuPRAXIA will deliver unique pulses of particles and photons. It will support important scientific work for users from many countries, including research on viruses like the Corona virus. It is exciting to see the preparations for this new European high-tech and science hub, with first funds committed by the Italian government for one of the two construction sites, based at Frascati close to Rome.”

The ESFRI roadmap 2021 will be formally approved by the forum in September and will be published during a launch event in December 2021.

EuPRAXIA is a consortium of presently 40 member institutes and 10 observers in 15 countries.

ESFRI, the European Strategy Forum on Research Infrastructures, is an important instrument to develop the scientific integration of Europe and to strengthen its international outreach. ESFRI has established a European roadmap for research infrastructures for the next 10-20 years which includes strategically important new research facilities, as well as major upgrades of existing ones. Previous roadmap updates proved to be very influential and provided truly strategic guidance for member states and associated countries investments.
Following a thorough evaluation and selection procedure, ESFRI proudly announced on 30 June 2021 the 11 proposals which have been scored highest for their science case and maturity for implementation and which will now be included as new projects in the ESFRI 2021 roadmap update. Amongst these projects is EuPRAXIA, the compact European plasma accelerator with excellence in applications.
The main purpose of EuPRAXIA, as indicated in its Conceptual Design Report which was an outcome of a 3 million Euro study under the Horizon 2020 programme and which was published at the end of 2019, lies in the realization of a next generation plasma accelerator. This game-changing facility will be able to produce versatile beams for a range of applications at lower costs and smaller footprint than what can be achieved with more conventional radiofrequency accelerators.
Plasma acceleration is based on the excitation of an ionized gas by a laser or particle beam which is then used to accelerate electrons injected into it to high energy. The collaboration has already advanced experimental, simulation and theoretical capabilities significantly and will now move towards the realization of a distributed research infrastructures across its partner countries.​ 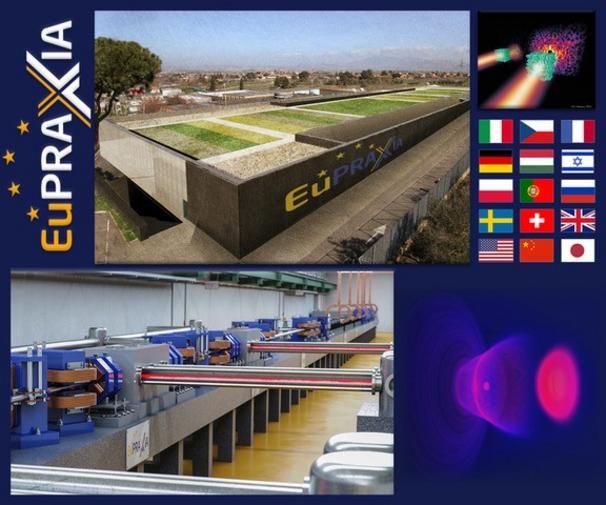