The Swedish Academy of Sciences has awarded this year’s Nobel Prize in Physics to Arthur Ashkin, Donna Strickland and Gérard Mourou “for ground-breaking inventions in the field of laser physics”. One of these inventions, called Chirped Pulse Amplification (CPA), lies at the very heart of EuPRAXIA.

Chirped Pulse Amplification is the technique that enables the generation of ultra-high intensity laser pulses. These pulses are essential for driving a laser wakefield accelerator, one of the plasma acceleration schemes that underpins the EuPRAXIA project.

In the decade following the invention of the laser in 1960, the maximum power of lasers increased dramatically thanks to the development of techniques like the Q-switch and mode-locking. However, this progress stalled in the 1970’s as the intensities involved surpassed the damage threshold of the laser components and non-linear effects in the amplifying media became unsurmountable.

The impasse was broken in 1985 when Strickland and Mourou, then at the University of Rochester (USA), borrowed the idea of Chirped Pulse Amplification from radar technology and expanded it into the optical domain. The idea consists on dispersing a broadband laser pulse and take advantage of the different paths followed by each wavelength to temporally stretch the pulse, giving it a chirp (i.e. a temporal variation of the frequency). Stretching the pulses reduces the peak power so that they can be safely amplified to high energies (several joules) without compromising the optical components of the amplifier. The high-energy, relatively low-power laser pulses can then be compressed back to their original duration by a negative dispersion device, creating ultrashort (femtosecond) pulses with peak powers of up to several petawatts.

CPA lasers have opened up a whole range of new and exciting possibilities in the fields of optical, molecular, atomic, plasma and accelerator physics, and in a way has united them into a new discipline of its own, called high-power laser science.

Petawatt-class lasers have not only enabled the realization of the laser wakefield acceleration concept, envisaged by Tajima and Dawson in 1979, they have also made possible laser-driven acceleration of ions, and have boosted the broader field of laser-plasma interactions, with applications to fusion energy and laboratory astrophysics. CPA lasers in the terawatt level have also had a huge impact in nonlinear optics, starting the field of attosecond science, and finding many applications from material processing to eye surgery.

This Nobel Prize is a recognition to an invention that supports a thriving laser industry and drives many exciting research projects around the world, including EuPRAXIA. Moreover, the idea of Chirped Pulse Amplification is still far from having exhausted its full potential. The future looks bright for high-power lasers.

Basic schematic of a CPA laser .

2018 Nobel prize in physics awarded for invention that drives EuPRAXIA 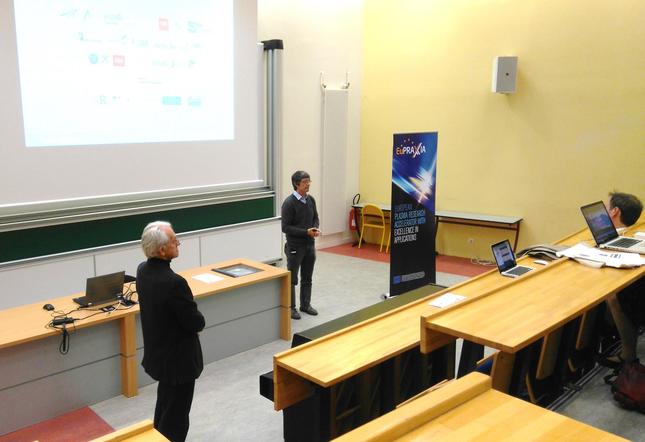