Overview of the proposed accelerator concept (not to scale).

Members of the EuPRAXIA collaboration have proposed a new method to reduce the inherent large energy spread of plasma-based accelerators.

These devices naturally imprint a longitudinal energy correlation along the accelerated bunch, leading to a large relative energy spread (typically on the 1-10 % range), which severely limits their usability.

The team of scientists from DESY and the University of Hamburg describe the technique in an article recently accepted for publication in Physical Review Letters.

The researchers carried out simulations Numerical simulations with the Particle-in-Cell (PIC) code FBPIC as well as the tracking codes ASTRA and CSRtrack.

Simulations of a particular 1.5 m-long setup show that 5.5 GeV beams with a relative energy spread of 1.2×10−3 (total) and 2.8×10−4 (slice) could be achieved while preserving sub-micron emittance. This is at least one order of magnitude below current state-of-the-art and would enable applications such as compact free-electron lasers. Although the researchers used Laser Wakefield Accelerator stages in this work, the core idea behind the scheme would be equally valid in the case of a particle driver.

Ángel Ferran Pousa, leading author of the article says: “Electron beams obtained with this method could enable ground breaking applications, such as compact FELs, and could be accelerated to higher energies thanks to its modular design, potentially enabling other applications such as plasma-based colliders.”

This could be achieved either by introducing additional plasma stages while keeping a single central chicane, or by repeating multiple sections of one chicane every two plasma accelerating modules. 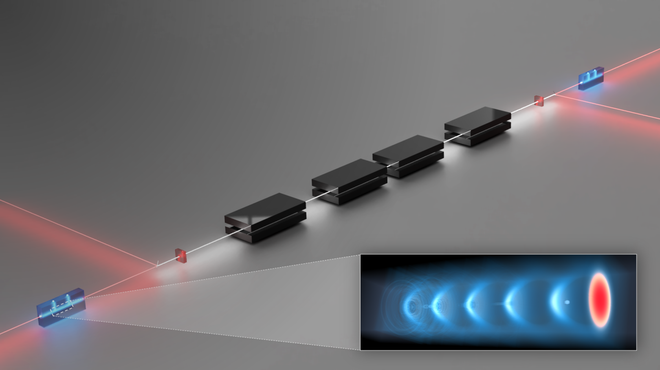