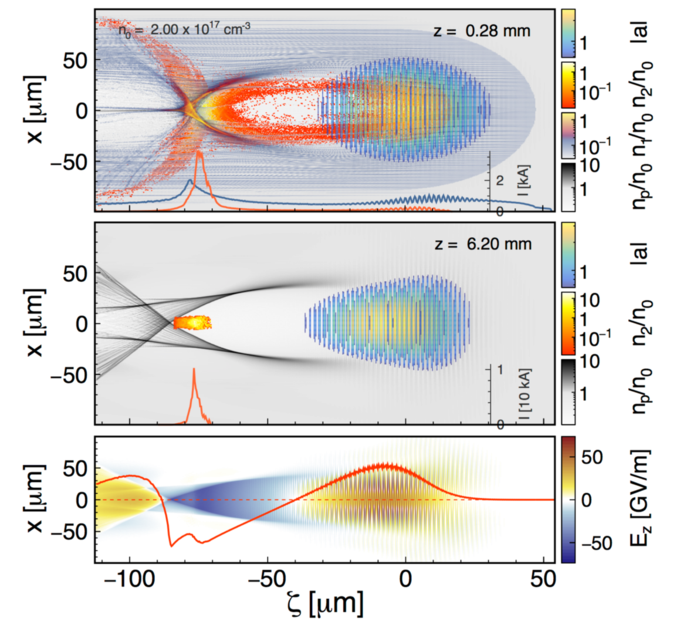 A meeting between experts on hybrid laser-electron beam-driven acceleration which are collaborating within EuPRAXIA’s work package 14 was held at DESY on 27th July 2016. The aim was to discuss the minimal requirements for the implementation of a plasma wakefield accelerating (PWFA) stage based on a beam that is first accelerated by a laser wakefield accelerator (LWFA). This is an important part of overall parameter optimisation for a future European plasma accelerator.

The participants agreed that the first key parameter for the internal injection of a witness beam in the plasma wakefield is the peak current of the beam. This should be around 5 kA or even higher for ionisation-based techniques. This condition could be slightly relaxed by means of density down-ramps which would facilitate electron trapping, however, it seems unlikely that going below below 3 kA would be an option.

The bunch length was discussed as second key parameter as this determines the density scale of the second stage for resonant wakefield excitation. Exceeding plasma densities of 1019 cm-3 in the PWFA stage might cause important technical difficulties for the experimental implementation of controlled injection mechanisms, due to the reduced scale of the plasma wavelength (~10 μm). Therefore, it was agreed to set the minimum bunch length required to ~2 μm (rms).

Finally, a setup for a LWFA stage that utilises a 500 TW peak power, 100 fs duration and 53 Joules energy laser, operating a plasma density of 2 x 1017 cm-3 was also discussed. Using these parameters, a 2D PIC simulation in OSIRIS showed successful injection (by means of ionisation injection) and acceleration of an electron beam with 100 pC charge, 15 kA peak current and ~2 μm (rms) length.

Although this might already be a good working point for more detailed studies, the participants agreed on considering it an extreme case due to the rather short pulse length. Going for longer pulses which could operate plasma densities below 1019 cm-3 would require the use of higher peak power and longer pulse duration lasers that could start the process at a lower plasma density in the first (LWFA) stage. Alternatively, bunch stretching could also be achieved by injecting during a negative density gradient. Both concepts are now subject to further investigation within the EuPRAXIA work package.