The EuPRAXIA consortium held its third Yearly Meeting, followed by two and a half days of collaboration meetings, at the Istituto Nazionale di Fisica Nucleare, in Frascati (Italy) from 19 to 23 November. The event included the participation, for the second time, of the Scientific Advisory Committee of EuPRAXIA.

EuPRAXIA is in its fourth year of life, moving fast towards the completion of the Conceptual Design Report, and its public visibility is picking up momentum to have a maximum impact at the end of the project.

Work package leaders gave an overview of the progress made within the consortium over the last year. The research has focused on improving the beam quality of 5 GeV electron plasma accelerators, validating their first applications, and demonstrating their benefits in performance, size or cost versus established RF technology.

Researchers also implemented the recommendations received from the Scientific Advisory Committee in their first report, while the management team has laid out the structure of the Conceptual Design Report (CDR) and initiated a user survey.

The EuPRAXIA facility aims to be the required stepping stone towards the scientific and industrial market, and also towards high energy applications like lepton colliders. With that purpose it could be established as a new European Open Innovation Research Infrastructure, where knowledge and ideas are openly exchanged among companies, universities, and big science labs.

Recent events, like Germany’s support of the Athena project or the award of a Nobel Prize for the technology that underpins EuPRAXIA, draw an excellent general landscape for our field. The meeting showed that EuPRAXIA is on track to deliver an outstanding CDR at end of October 2019. ​ 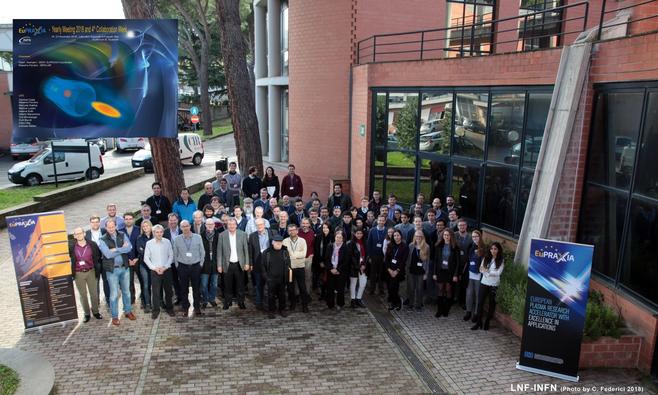