The EuPRAXIA consortium held its fourth and final yearly meeting from 16 to 18 October 2019 at DESY (Hamburg).

The meeting marked the completion of the Conceptual Design Report of what would be the world’s first multi-GeV plasma-based accelerator with industrial beam quality and dedicated user areas, bridging the gap between successful proof-of-principle experiments and ground-breaking, ultra-compact accelerators.

Coordinator Ralph Assmann summarised the main outcomes of four years of work in EuPRAXIA, while the work package leaders gave an overview of their findings in the areas of simulation, plasma acceleration structures, laser design, RF systems and beamlines, diagnostics, alternative injection and acceleration schemes, and pilot applications.

An important area of discussion was the implementation structure of EuPRAXIA. EuPRAXIA proposes up to 10 clusters of collaborating institutes for addressing critical challenges in certain technical areas such as high peak-power laser technology.

The structure of EuPRAXIA will be established around two construction sites and five centres of excellence. One of the construction sites will be based on laser wakefield acceleration (LWFA) and the other on plasma wakefield acceleration (PWFA). The centres of excellence will be implemented at existing facilities inside the EU and operated in close collaboration with the technical clusters.

Representatives from the candidate institutions to host a construction site or a centre of excellence presented their proposals, which were followed by a round-the-table discussion.

The meeting was concluded by representatives of the two main European manufacturers of high-power lasers, Amplitude Technologies and Thales Optronique, offering their views from the industry.

The EuPRAXIA project will create a critical mass of expertise and capabilities in Europe, supporting and furthering the position of Europe as a world-leading competitor in accelerator innovation and laser technology.

Participants in the final yearly meeting of EuPRAXIA. © DESY 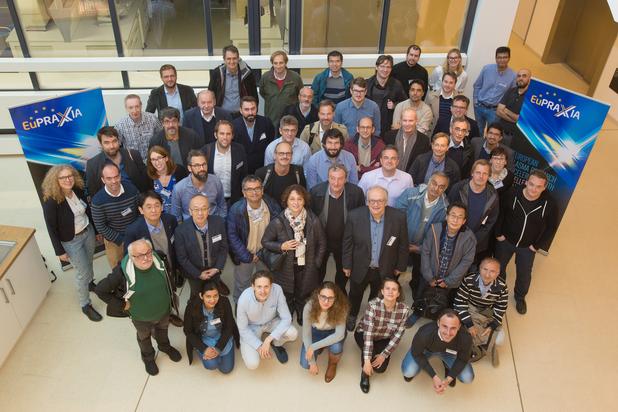