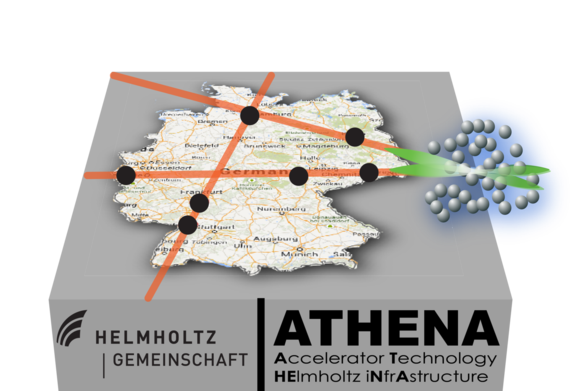 Together, these centres want to set up two German flagship projects in accelerator research based on innovative plasma-based particle accelerators and ultramodern laser technology: an electron accelerator at DESY in Hamburg and a hadron accelerator at HZDR. At both facilities, a range of different fields of application are to be developed, ranging from a compact free-electron laser, through novel medical uses to new applications in nuclear and particle physics. As soon as they have reached the necessary level of maturity to be put to practical use in a particular area, new compact devices could be built for use in other Helmholtz centres, as well as in universities and hospitals.
“The funding of the ATHENA project, which is coordinated by DESY, is an important milestone in the ARD (Accelerator Research and Development) programme which was set up by the Helmholtz Association in 2011,” explains Reinhard Brinkmann, one of the initiators of ARD and the head of the accelerator department at DESY. “Channelling the competencies of the various Helmholtz accelerator centres promises to lead to ground-breaking developments and new applications for ultra-compact particle accelerators.”

Only few centimetre long plasma cells can accelerate particles to high energies (photo: DESY/H. Müller-Elsner).
Ralph Aßmann, the project coordinator of ATHENA and lead scientist at DESY, and Ulrich Schramm, head of laser particle acceleration at HZDR, agree that “The study of new types of plasma accelerators takes place in the context of strong international competition from the US and Asia. ATHENA is consolidating the traditional leading role of Germany’s accelerator research and supporting Germany’s international competitiveness as a place for doing science.”
The work on ATHENA is closely embedded in the wider context of European research through the EU-sponsored design study EuPRAXIA, with its 40 partner institutes, which is also coordinated by DESY. Hence the top German research project ATHENA has had a clear European perspective and orientation right from the start.​