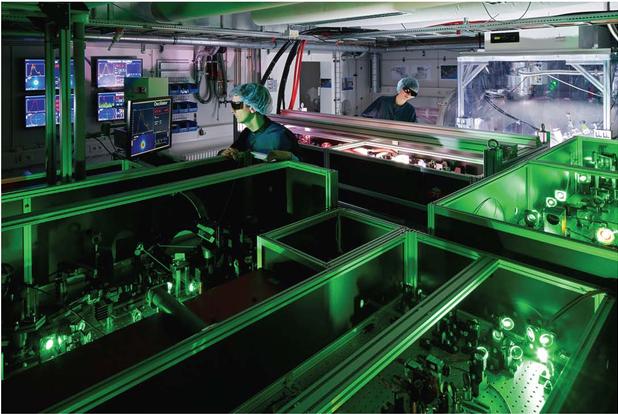 The achievement of the “1003 challenge” will bring significant advancements in the technology of high pulse energy lasers needed for pumping femtosecond amplification systems. Current systems based on flashlamp pumping, although very reliable, has inherent limitations in terms of overall efficiency and repetition rate. The Diode Pumped Solid State Laser (DPSSL) technology has the potential of overcoming this limitation, thanks to its superior overall efficiency.  The definition and the evaluation of suitable and feasible DPSSL architectures based on this technology is one of the aims of EuPRAXIA.

EuPRAXIA aims at investigating laser stability limits and designing solutions that will improve laser stability. This can be achieved by optimizing the laser transport (e.g. mirror stabilization) and by optimizing the laser itself. Eventually, the EuPRAXIA laser will be an industrial system which will include all the technology developed in close collaboration with the manufacturer.

EuPRAXIA will foster further progress on this technological frontier. Lasers that are timed precisely to an external reference and ultrafast electronics can be implemented in many technological devices, like laser heaters, laser vibration monitoring, laser wires, ultra-precise timing reference systems, femtosecond stabilization loops, etc. Ultrafast technology will contribute to the successful development of miniaturized technology.

The repetition rate of the laser determines the repetition rate of the accelerated electron bunches. Although the peak current of the wakefield-accelerated electrons can be very high, the low repetition rate yields an average electron flux that is too low for some practical applications. It may also hamper the achievements of good statistics in measurements. Moreover, a low repetition rate is usually associated with poor laser stability in terms of energy and beam pointing. As an example, laser beam pointing stability of current systems is estimated to be approximately one order of magnitude worse than required for EuPRAXIA. Such an improvement will require automatic stabilization at high repetition rate.
There is currently a great international effort to increase the repetition rate of high-power lasers. The main impediments are the efficiency of the pump lasers, which must deliver a large amount of energy (of the order of tens of joules or more), and the thermal load on the laser crystals which must dissipate the excess energy. EuPRAXIA has identified this goal in the “1003 challenge”, that is, the design and construction of a laser capable of delivering pulses with a duration of 100 femtoseconds and an energy of 100 joules, at a repetition rate up to 100 hertz.

​The timing and the accuracy required for a plasma accelerator are in the femtosecond domain. The mechanical miniaturization of the system (e.g. plasma structures) leads to a much reduced tolerance in the stability and goes hand in hand with ultrafast synchronization electronics and correction feedback loops that must react before the operational limits are violated. 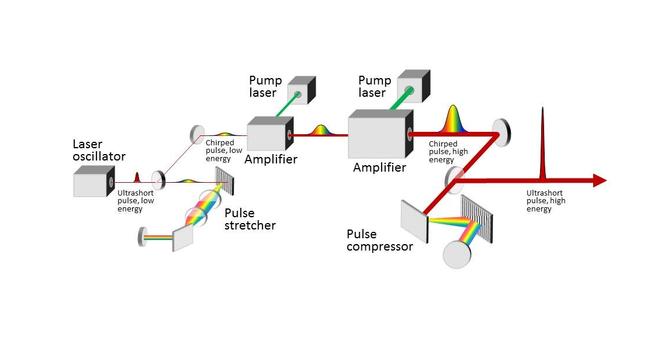 The implementation of a laser wakefield accelerator (LWFA) at the 5 GeV target energy of EuPRAXIA requires the most sophisticated and robust laser technologies available. The EuPRAXIA laser will produce ultrashort pulses of infrared light with a pulse duration as short as a few tens of femtoseconds and energies up to 100 joules, yielding a peak power of the order of several petawatts (1 PW = 1015 W). More importantly, the EuPRAXIA laser will deliver such pulses with a repetition rate as high as 100 Hz, a performance never achieved so far.
High-power lasers work by successively amplifying the ultrashort laser pulses that originate in a laser oscillator. In order to avoid damaging the laser components as the light power increases, the temporal duration of the laser pulse is lengthened in a pulse stretcher. In this way, the energy of the pulses can be safely amplified while maintaining their power below the damage threshold of the different optical components. After the last amplification stage the pulse is recompressed to the original duration in a pulse compressor, to come out as a high-power ultrashort laser pulse. This technique is called Chirped Pulse Amplification (CPA).

Although CPA lasers deliver a huge amount of power, they do so with a low repetition rate. State-of-the-art petawatt-level CPA lasers can deliver up to one pulse per second (1 Hz). Therefore, the average power (power emitted over an extended period of time) of a petawatt laser is not much higher than hundreds of watt
The underlying requirement of CPA laser pulses is their large spectral bandwidth, up to tens of nanometers. As a consequence, CPA laser amplifiers use gain media which are capable of supporting amplification over such a large bandwidth. The most versatile gain media available today is Titanium doped Sapphire (Ti3+:Al2O3, or simply Ti:Sa). It has excellent physical and optical properties and can amplify broadband laser light from 660 nm to 1100 nm. Ti:Sa can be pumped by radiation in the 400-600 nm spectral window, making frequency doubled, flashlamp-pumped Nd:YAG lasers the ideal pumping source. This is also the main limitation to the scaling of Ti:Sa based lasers to the required EuPRAXIA specifications, namely the laser repetition rate.