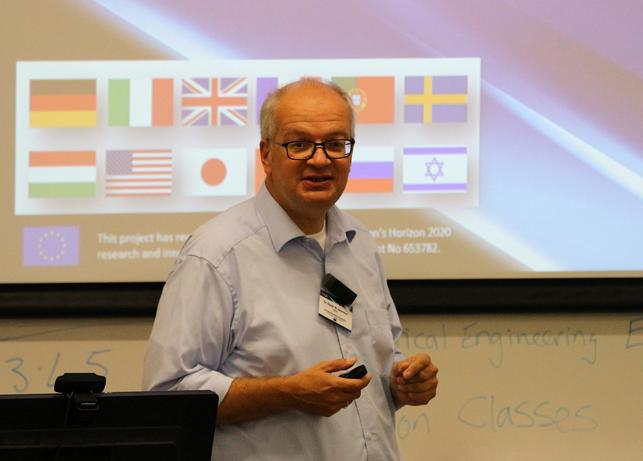 ​Dr Ralph Assmann was interviewed by Horizon magazine, the EU’s science and innovation magazine, about EuPRAXIA’s place in the particle accelerator landscape and the forthcoming publication of the Conceptual Design Report.

Horizon.  I understand the basic concept of plasma wakefield accelerators, and I have also seen your brochure. But can you tell me when they were invented, and (in general terms) how quickly they have been developed?

RA. They have been proposed in 1979 in a theoretical paper by Tajima and Dawson published in Physical Review Letters. The lasers were not yet available but invented in the 1980‘s by Mourou and Strickland. Since then the achievable electron beam energy increased exponentially with time. By now 4.25 GeV electron beam energy can be achieved in 9cm.

RA. Accelerating fields a thousand times higher than in RF accelerators are routinely achieved in many places. Multi GeV electron beam energies are produced reproducibly, quality has greatly improved by some factor 10, lasers as drivers are progressing rapidly: shrinking in size and growing in power. European laser industry is world leading and all the world buys these European lasers, including US and Asian competitors (e.g. Berkeley). Big challenge is to improve quality another factor 2-5 and to establish pilot applications. This is now more on the engineering side than on invention. This is why big accelerator labs can help.

Horizon.  Why is your project to build a 5 GeV plasma accelerator so important?  Is there something special about 5GeV as an energy milestone, for example?

RA. The 5 GeV was chosen because it is presently just achievable, so we can concentrate on quality, but also because it is in the regime of hard X ray free electron lasers which operate in this energy regime. To produce a small size and lower cost free electron laser for low power users would be the break-through result needed to start a user basis, e.g. reaching out into mid size lab environments in research centers, universities, hospitals, etc. In addition, this 5GeV would be a stage towards a high energy physics collider: 50 such stages for 250 GeV beam energy. Higher power will need higher average power laser solutions, something European laser industry works on.

Horizon. What will your conceptual design report for EuPRAXIA achieve?

RA. It will propose a European project and consortium that brings together the required expertise, credibility and resources to make plasma accelerators usable and to succeed in the ongoing competition with US, Japan and China. In addition to a consistent engineering approach it will also include some innovative solutions that we have published and want to build. This project will also help to defend world leadership of European high power laser industry by providing incentive requirements and a growth in customer basis.

Horizon. After the CDR (in November next year?) will the accelerator be built? If so, how long will that take? And what will the facility look like, roughly?

RA. Whether a European project will be built depends on the availability of European resources. Presently LNF at Frascati is starting a construction project EuPRAXIA@SPARClab and Helmholtz in Germany has just announced a 30M€ material investment on laser-driven plasma acceleration in the context of EuPRAXIA - the first step towards EuPRAXIA (see press release). The EU initiative LEAPS could provide some resources for the technical design and prototyping but European construction requires additional resources. At present we realistically foresee implementation/prototyping phase from 2020 to 2022 and construction from 2023 to 2026. We are discussing how it would look like but it is clear that it will be centered in Italy, France, Germany with roughly equal levels and will be supported by consortia in Portugal, UK and possibly Czech republic (ELI). EuPRAXIA should be constructed as a particle physics detector: all connected labs use their local infrastructure to develop, prototype and test the required components. Then we construct together the facility at probably two locations with different specializations, e.g. the laser-driven approach in Hamburg/DESY and the beam-driven approach in Frascati/Italy. We are still discussing this but presently we think that such an integrative approach is better than choosing one or the other.

Horizon. Pretend for a moment that you are speaking to a non-scientist member of the public: why should he or she care that this accelerator is being built? (That is, what are the most easy-to-grasp applications?)

RA. Particle accelerators today produce X rays for precise medical imaging of the human body, for studying how bacteria react to medicine, for inspecting cargo and many other applications. There is more demand than the big and cost-intensive accelerator facilities can satisfy. Based on the world-leading lasers from European industry the novel plasma accelerators can reduce the size of such facilities such that they can be used in many additional places, broadening access and for example providing opportunities to study many additional bacteria, viruses, etc. The public in Europe will profit from the advance in knowledge to be expected but also from the well paid jobs such high technology investments create and defend.

Horizon. Particle physics is in a bit of a sticky spot at the moment. To put it bluntly, are synchrotrons, linacs and so on dead—and are plasma accelerators the future? (Could they be how we access energies beyond those of the LHC?)

RA. Plasma accelerators provide a path to higher energies beyond LHC and particle physics must take this opportunity very serious. However, RF accelerators are highly developed and it is difficult to catch up. This is why an intermediate step like EuPRAXIA with other applications is required for plasma accelerators. This will prove a number of issues required also for colliders. Afterwards the field can concentrate on the other difficult challenges for plasma colliders (positron acceleration in plasmas, emittance, luminosity, ...). If we cannot build a 5GeV plasma FEL, then also a 500 GeV or 3 TeV plasma collider will not work. Clearly: high field accelerators like plasma accelerators can be the logical long term solution for advancing the energy frontier in particle physics. But it require a realistic and sustained approach. By the way, before coming to DESY in 2012 I was a senior scientist at CERN, one of the guys building and commissioning the LHC. I got motivated by this vision beyond LHC to look at plasma accelerators after we discovered the Higgs...