The University of Liverpool has just launched an interactive game to promote and popularise the concept of plasma wakefield acceleration.

The online game – called Surfatron – lets the user experience the challenges faced by the scientists investigating in the field of wakefield accelerators.

Surfatron simulates the motion of a ball in an undulating track. The ball stands for a charge particle – an electron - and the undulating track represents a plasma wave. The goal of the game is to get the ball to gain as much speed as possible in the wave.

The player can adjust the initial speed of the ball as well as the amplitude, wavelength, and frequency of the wave, in order to find the optimum conditions, and then launch the ball at the right time to catch the wave at its peak.

The Surfatron game was created by Ricardo Torres, who has been involved in the management and communication of a number of international accelerator projects, notably AWAKE and EuPRAXIA.

Ricardo says “I was thinking on a way to convey the concept of wakefield acceleration in a visual manner and I thought of a rotating screw pushing forward a ball lodged in its thread. I started to write a code to simulate the physics of such a machine and I turned it into a game. That’s how the Surfatron was born.”

The game was exhibited in a number of conferences, in particular the International Particle Accelerator Conference – IPAC in Vancouver (Canada) and Melbourne (Australia) as well as in numerous outreach events, where it proved very popular with children and adults alike.

The Surfatron has now been made available online so that anybody can play it from anywhere, even on a mobile phone.

The imagined contraption that originated the idea was eventually built by the technicians in the mechanical workshop of the Physics Department. The mechanical Surfatron was unveiled at the LINAC2022 conference in Liverpool (UK) where it was used alongside the computer simulation.

Ricardo says “Usually we run computer simulations for physical processes that cannot be seen by eye. Having the mechanical Surfatron alongside the simulation is very exciting. The simulation has also revealed some unusual behaviours that would be very interesting to see in real life.”​

Click here to play the game and learn more about the physics of wakefield acceleration, or watch the demo video on youtube! 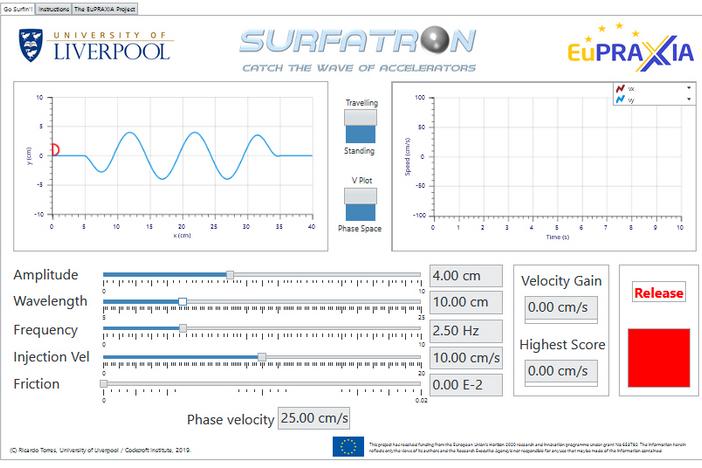 Surfatron – Catching the wave of accelerators